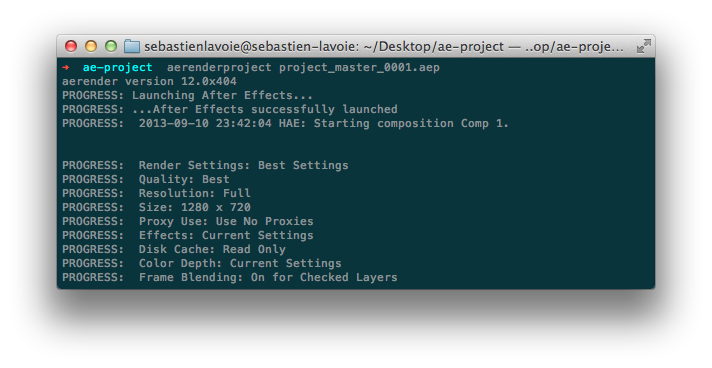 Tagged with: After Effects, Code

Adobe provides us some command line interface to start renders without having to start After Effects (here’s the documentation). This can be really useful when using multiple computers on remote desktops or just to give you the ability to alt+tab, start your render and keep on working. It offers a lot of options and possibilities. We won’t go over all of them, but we’ll instead focus on creating bash aliases to execute what we would probably mostly want. Don’t worry if you’ve never used the command line, we’ll go over all there is to know.

So here’s what we will create our aliases (shortcuts) for.

Before we get to the code, we’ll make sure you have all that is needed to use it properly.

This technique can help you improve your rendering speed in many ways. It is also a good use of command line which we’ll probably use in further articles.

Do you have any other geeky tricks to improve your rendering techniques?

← Resources to help you start practicing your skills

How to use checkbox expressions in After Effects →